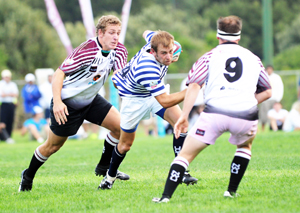 The Ikey Tigers maintained their decent start to this year's FNB Varsity Cup when they edged bitter rivals North West University's Pukke by 18-11 at UCT on 8 February.

The hard-fought victory followed the Tigers' 30-all draw against the Free State University Shamlas in Port Elizabeth in the first match last week.

The win also ended the Pukke's stranglehold over the home side, who were beaten twice last year by the team from Potchefstroom.

Playing with a strong wind at their backs, the Pukke took an early 6-0 lead when fullback Theuns Kotzé slotted two penalties. But the visitors' advantage was reduced when Marcel Brache scored the home team's first try eight minutes before half-time, the sides going into the break at 5-6.

"I thought we had the game when we were just one point down at halftime," said coach John Dobson. 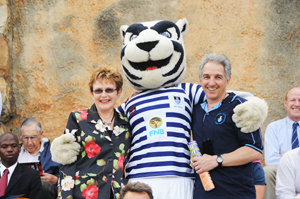 UCT took the lead early in the second half, Dayne Jans touching down two minutes after the break. Matt Rosslee converted the kick before Branch made it 15-6 with a monster penalty kick from inside his own half.

Replacement flyhalf Douglas Mallett added three more points when he also slotted a penalty from inside his own half.

But the visitors got some rewards for their impeccable driving when skipper and lock forward Dirco Rautenbach scored a try from their umpteenth maul close to the line to reduce the deficit to 18-11 late in the second half.

UCT held on, though, for a deserved win. A standard feature was the Tigers' determined defence. "Our defence was awesome," said vice-captain, Stuart Commins, after the match.