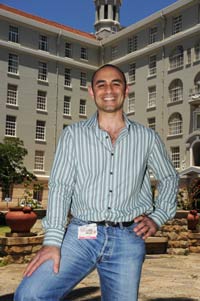 For Dr Nick Kairinos, winning accolades seems to come naturally - he has won awards every year since joining Groote Schuur Hospital (GSH) in 2005.

Last year he added three more when UCT awarded him with one of its 19 research associateships, he won the award for the best presentation by a registrar at the South African Society for Surgery of the Hand Congress, and was honoured with the best publication of 2009 award at the Association of Plastic and Reconstructive Surgeons of Southern Africa Congress.

The best registrar prize was for a new technique he devised with colleague Dr Steve Carter to separate syndactyly (fused fingers) in congenital-hand surgery, and the award for the best publication was for his publications on negative pressure wound therapy, two of which appeared back-to-back in the world's number one peer-reviewed plastic surgery journal, Plastic and Reconstructive Surgery.

Kairinos, a registrar with GSH's Department of Plastic and Reconstructive Surgery, attributes his 14 awards in five years to "an enquiring mind and the drive to follow your questions through with appropriate research".

He says he is fortunate to be in an academic environment at UCT where young researchers are nurtured. Kairinos adds that his head of department, Professor Donald Hudson, is one of the most well-published professors in South Africa, and that has helped in making his publications to be of a high calibre.

"The encouragement and support I've received from other senior colleagues too, such as Dr Mike Solomons, Prof Del Kahn and Prof Kit Vaughan, has been a stimulus to keep researching."

But to win congress prizes there is also an element of luck, he says.

"If your research findings happen to be novel, and especially if they are controversial, it makes the audience sit up and listen. Unfortunately, research doesn't always lead to interesting discoveries ...I was lucky there!"