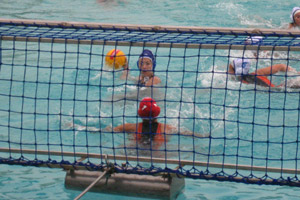 Making a splash: UCT's Jade Liddell sets herself up to score the winning goal in UCT's water polo match against the University of Johannesburg.

UCT teams did okay if not always spectacularly at three of University Sport South Africa's (USSA) regular end-of-the-year tournaments, staged around the country over December.

In tennis, the UCT men were placed fifth overall from 18 teams and the women fifth from seven teams at the event hosted by Rhodes University. Good news is that Scott Havemann, Richard Mellon and Menzie Mthembu were all selected for the national men's student team.

The Water Polo Club did markedly better at its competition in East London, hosted by Border Aquatics. The women pipped six other squads to take first place, earning their fifth successive USSA win. The men finished as runners-up in their section of nine teams. Five players from each of the UCT teams were also named for the national student squads.

There were more standout performances for UCT at the yachting championships, hosted by the University of the Witwatersrand at Boskop Dam in the North West Province. UCT took top spot overall out of the four universities competing, earning themselves the Pike Trophy. Bridget Clayton and Ashleigh Crosland also won the overall women's event, while Oliver Hobson has been selected as USSA's yachting chairperson for 2010. UCT sailors will have home-waters advantage in December 2010 when it's their turn to host the event.