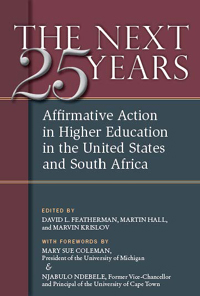 Former deputy vice-chancellor Professor Martin Hall, former vice-chancellors Njabulo S Ndebele and Dr Stuart Saunders, and a string of UCT scholars are among the contributors to the recently released The Next Twenty-five Years: Affirmative Action in Higher Education in the United States and South Africa

Described as a "penetrating exploration of affirmative action's continued place in 21st-century higher education" and a "must-read for anyone who cares about the future of higher education in diverse democracies", the book brings together essays and papers from influential scholars, educators, university leaders and public officials.