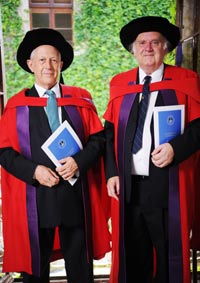 On 14 December, UCT conferred honorary degrees (honoris causa) to two of its most distinguished scholars, Emeritus Professors George Ellis and Brian Warner, at the summer graduation ceremony. Although retired, the two are still active scientists (Warner in astronomy and Ellis in cosmology), who last year won Honorary Fellowships from the Royal Society of South Africa.

A UCT alumnus, Ellis (left in the picture) is one of the most distinguished scholars this country has produced. In his more than 40 years' work experience, he has produced over 350 articles or chapters in books, and 12 books spanning disciplines as diverse as cosmology, complexity, neural development and the brain, science policy, social development, science and mathematics education, and the relationship between science and religion.

Warner stands out as one of the most distinguished scientists to have made South Africa his home. His career spanning some 50 years has produced a "prodigious" scientific output, with 400 scientific papers and 18 books to his name. At least one, Cataclysmic Variable Stars, is considered definitive in its field.