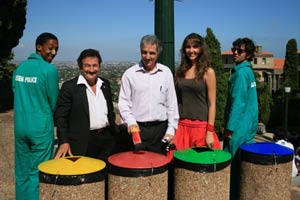 More UCT students in residences are heeding the call to recycle their waste, a Green Campus Initiative (GCI) survey has revealed. According to the GCI's analysis, the rate of waste recycled in self-catering residences increased from 56% in July to 69% in September.

We can conclude that students are recycling more the longer the recycling system is in place, and that the system is working," said Terence Goldberg, one of GCI's founder members.

Goldberg, an honours student in applied mathematics, said they had also found that food waste levels at the residences were lower than expected, "probably because students are very well behaved in the dining halls". The food that is wasted, like bread and salad, was more often not taken from the buffet.

Meanwhile, the Glendower Residence has won the inaugural Energy Challenge, which saw residences competing to reduce their total energy consumption over a specified period.

"We analysed the results in a variety of ways: energy saved per person, per day, and took into account other factors, such as the general usage of the residences that weren't involved, and possible problems with the meters themselves," Goldberg explained.

The competition was sponsored by Eskom, and half of the R20 000 prize will go to an initiative to improve energy efficiency in Glendower Residence.