Study of "one of the darkest galaxies known" 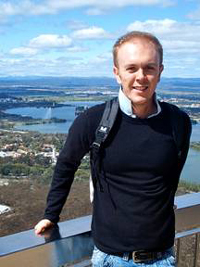 At the recent South African Square Kilometre Array Youth into Science and Engineering Programme, two UCT postgrads, Jason Manley and Edward Elson, were among six students whose projects were chosen for presentation.

Titled New insights into the dynamics and evolution of the blue compact dwarf galaxy NGC 2915, Elson's project is a detailed study of the properties of a sample of nearby dwarf galaxies. These systems form a unique morphological class of galaxies, being relatively small, low-mass collections of stars, gas and dark matter. In the standard cosmological model of the Universe, dwarf galaxies are thought to dominate the cosmic scenery in terms of number density, far outnumbering the large spiral and elliptical galaxies.

"Being scraggly collections of stars, dwarf galaxies are not particularly impressive simply to look at, yet they serve as unique laboratories in which to test theories of star formation, as well as our understanding of the properties of dark matter. Dark matter is known to constitute about 25% of the mass-energy budget of the Universe, yet we have hardly any idea of what it really is. Dwarf galaxies can help in this regard since they, in particular, are known to be very dark-matter-dominated systems, having their stellar components embedded in large dark matter halos. The inferred dark matter properties of these galaxies can be directly compared to theoretical predictions from state-of-the-art numerical simulations of dark matter halo formation."

Elson says that using a dwarf galaxy's observed stellar dynamics to trace the dark matter is a powerful technique, yet it does not allow one to probe the outer parts of the dark matter halo.

"We have carried out radio-frequency observations of the gas content of a nearby dwarf galaxy, NGC 2915, for which we now have the highest-quality data set ever obtained."

These data are used to study the galaxy's dark matter content out to a distance of 20 times the extent of its stellar disk.

"This is not always possible for dwarf galaxies, but in the case of NGC 2915 it is, since surrounding the optical core is a huge, rotating gas disk," Elson adds. "Neutral hydrogen gas (HI) is an important component of most galaxies. HI synthesis observations of the gas within a galaxy provide us with a detailed measure of the gas distribution and, very importantly, the gas dynamics. For NGC 2915 we determined the rotation velocity, as a function of radius, of the gas orbiting the galactic centre. Newton's laws directly link these measured rotation velocities to the total amount of mass contained within their orbits.

"When we calculate the expected rotation velocities due to the stellar and gas components of the system, we encounter a problem: they are far too small as compared to the observed rotation velocities. This is evidence for a large unseen mass component, the dark matter. We have determined that the stars and gas in NGC 2915 make up less than 8% of the total mass. At least 92% of the mass in this galaxy is constituted by dark matter. This makes it one of the darkest galaxies known. NGC 2915's large dark matter mass fraction plays a crucial role in the overall evolution of the system and, to a large extent, will determine the eventual fate of the galaxy."

An important unanswered question is whether there are many more galaxies like NGC 2915 out there.

"If so, could they provide us with new insights into the evolutionary links between dwarfs and large spiral galaxies?" Elson asks. "This is a question that South Africa's SKA technology pathfinder telescope, MeerKAT, can help to answer."