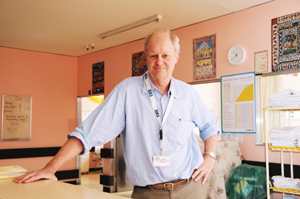 Over the past 25 years, Roux has spearheaded a number of initiatives that are benefiting children and their families, and, in some instances, paving the way for government programmes.

Now his efforts have earned him the Excellence in Healthcare Award from the Health Professions Council of South Africa. The accolade recognises the outstanding contributions of organisations or individuals to health care in South Africa.

Roux, a senior lecturer with the Division of Paediatric Medicine in the School of Child and Adolescent Health, was honoured for establishing the Paediatric AIDS Treatment for Africa (PATA) programme, an NGO dedicated to the improvement of quality of health care delivered to African children living with the virus.

PATA was started after Kidzpositive, another NGO Roux initiated, had begun to deliver anti-retroviral treatment to children at Groote Schuur Hospital in May 2002, two years before the South African government began its ARV roll-out.

Roux launched a 'visiting treatment team' programme in 2004, when he discovered that there were "well-educated colleagues" in Africa who, at that time, had not treated patients with anti-retroviral treatments "because they were frightened to start something they had not done before". This initiative led to the establishment of PATA in 2005.

The organisation borrowed its name from a Miriam Makeba song, Pata Pata, meaning "reach out" in kiSwahili and "to touch" in isiXhosa and isiZulu.

By reaching out and touching communities and health professionals, and helping to build capacity in Africa, PATA aims to create a ripple effect of treatment action that will give a growing number of children access to life-saving antiretroviral therapy and holistic care.

It is a network of treatment teams that includes doctors, nurses, counsellors and pharmacists who work to improve quality of health care through self-initiated projects.

After each annual conference, teams are invited to choose quality improvement tasks to be done in their clinics, with incentives put in place to encourage their implementation.

"We try to be very practical and avoid a lot of academic stuff," Roux said.

So far, PATA has 150 teams running projects that involve more than 120 clinics in 23 countries.

"PATA does not tell people what to do, but helps them discover common goals and how to collaborate to get things done."

Listening to other people's ideas is what excites Roux, and gives him and PATA the energy to move forward, he added. Through the nomination by Professor Heather Zar, Roux's colleague in the division, this is the first time that PATA and its work has been acknowledged.