No more monkey business with baboons 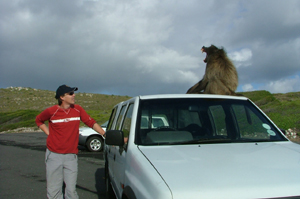 If baboons are something of a nuisance to locals, it could well be because, as UCT doctoral student Tali Hoffman has now shown, humans are encroaching all the more on the baboons' stomping grounds on the Cape Peninsula.

As part of her doctoral research with the Baboon Research Unit in the Department of Zoology, Hoffman has compiled a series of digital maps - based on months-long tracking of baboon movements, and some 25 000 GPS points that came out of that exercise - that pinpoint the baboons' home range on the Peninsula - from Tokai to Cape Point - to a very fine scale.

And, no, baboons don't just hang out up on the mountains somewhere, well clear of humans.

"They require the same areas of land that humans steer towards - your low-lying, flatter land," explains Hoffman. "For humans it's easier to build on, for baboons it's richer in resources."

Hoffman's maps have now been accepted by the Strategic Development Management Department of Environmental Affairs and Development Planning in the Western Cape, which means that any new developments will have to take into account the baboons' habitats. (And even if developments go ahead, there will have to be some kind of mitigating provisions.)

At the very least, it's hoped that the maps will curb the growing conflict between baboons and humans, says Hoffman's supervisor, Dr Justin O'Riain.

"Tali's maps are the single most important juncture in the history of our attempts to conserve this baboon population."

To further illustrate the value of Hoffman's work, she also received the award for the best oral presentation by a student at the 2009 Fynbos Forum, hosted by the Botanical Society of South Africa.