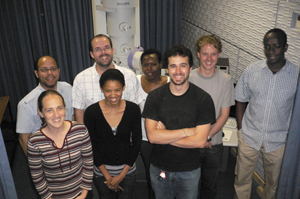 The epicentre of structural biology in South Africa is UCT's Electron Microscope Unit where students are studying the structures of proteins using techniques that led to the determination of the structure of the ribosome. This is pivotal work that has won three overseas researchers the 2009 Nobel Prize in Chemistry, announced in October.

The three researchers who shared the Nobel Prize in Chemistry this year are Ada Yonath of the Weizmann Institute of Science, Thomas Steitz of Yale University and Venkatraman Ramakrishnan of the Medical Research Council's Laboratory for Molecular Biology in Cambridge.

The pioneer of the trio is Yonath, only the fourth woman, and the first since Dorothy Crowfoot Hodgkin in 1964, to win the Nobel Chemistry award. She is also the ninth (and first woman) Israeli Nobel Laureate.

The central dogma of molecular biology is that DNA is transcribed to RNA which is translated to protein. This year's winners, the citation says, studied "the ribosome's translation of DNA information" to produce proteins, which control the chemistry in all living organisms. They have shown "what the ribosome looks like and how it functions at the atomic level".

What clearly differentiates the ribosome from other precisely-ordered biological structures is its scale and complexity.

At that time Yonath started her work the feasibility of the determination of the accurate three-dimensional structure of the ribosome met with considerable skepticism from most of the international scientific community. The only method yielding molecular structures is X-ray crystallography, which requires high-quality crystals.

However, ribosomal properties are unfavorable for crystallisation: they are flexible, heterogeneous and unstable. Yonath believed it was possible to crystallise ribosomes because she was aware that the ribosomes of hibernating polar bears are preserved through the winter because they form crystalline two-dimensional arrays. This observation gave her the courage to persist and ultimately produce diffraction-quality crystals from the ribosomes of a thermophilic bacterium.

Since ribosomes are crucial to life, new antibiotics are sought to attack the ribosomes of bacteria, and this is where the immediate application of the work lies.

"More than 50% of known antibiotics are targeted to ribosomes. Among the key discoveries is the precise mechanism of a number of these, information which will certainly lead to the discovery of new antibiotics", says Professor Roger Hunter, head of UCT's Drug Discovery Signature theme. Indeed, Tom Steitz has established a company for this purpose.

Venki Ramakrishnan is the fourteenth Nobel Laureate to have done his work at the MRC-LMB. Among these laureates are two South Africans, Aaron Klug and Sydney Brenner. Ramakrishnan attributes his success to the availability of the stable, long-term funding necessary to do a project like this. 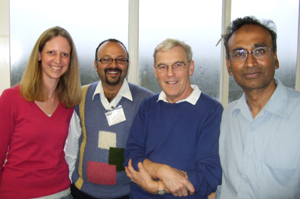 (From left) Jennifer Miller at the MRC-LMB with Sanjeev Kumar, Richard Henderson and Venki Ramakrishnan.

Currently, Jennifer Miller (a 2008 graduate of the master's programme in structural biology) is studying G-protein coupled receptors (the target of 25% of commercial drugs) with Richard Henderson. Henderson made it possible for UCT to acquire South Africa's first cryo-FEGTEM when the instrument was no longer required by the LMB.

Perhaps the key lesson that we can learn from this Nobel chemistry prize is that anything is possible in structural biology; but it takes time and a stable, supportive environment. (This report by Professor Trevor Sewell, director of the Electron Microscope Unit.)