Death of a star: A white dwarf waits to go kaboom 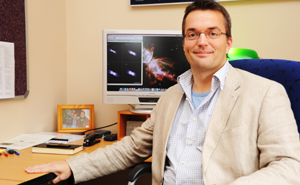 Mysteries unravelled: Assoc Prof Patrick Woudt is lead author of a paper on a double-star system that is a likely candidate to become one of the long-sought progenitors of the exploding stars known as Type Ia supernovae, critical for studies of elusive dark energy.

It's not often that an academic paper on the evolution of a supernova star - when a large dying star implodes - sends audiences scurrying for YouTube.

But Associate Professor Patrick Woudt and his co-author Emeritus Professor Brian Warner's paper (published in the 20 November 2009 issue of Astrophysical Journal) on the unique explosion of a white dwarf star, V445 Puppis, has caused quite a stir internationally.

V445 Puppis and its companion star are 25 000 light years away in the constellation of Puppis (The 'Stern') in our galaxy. This means the light emitted from them was during the Earth's Palaeolithic Period, when early humans were hunting and fishing and practising primitive forms of cultivation.

The central star in V445 Puppis had been sucking helium from its companion star, much like a vampire. Having tanked up on cannibalised energy, V445 Puppis had become heavy and unstable. The subsequent helium nova outburst - the first ever helium nova observed in the Milky Way galaxy - bumped up its brightness some 250 times, and the star began ejecting a vast amount of matter, several times the mass of the Earth.

Over the next two years, astronomers were able to get some very sharp images of the vampire star's dramatic evolution.

What they saw resembled a bipolar shell, shaped like a bow-tie, initially with a small waist and lobes on either side. The shell - unlike any previously observed for a nova - is moving at about 24 million kilometres an hour.

While the event offers a grandiose display of fireworks, it is also of huge value to astronomers, allowing them to calculate the distance away and intrinsic brightness of this peculiar outbursting double-star system.

This double-star system is a prime candidate for becoming one of the long-sought progenitors of the exploding stars known as Type Ia supernovae, critical for studies of elusive dark energy and our understanding of the Universe's expansion.

"Becoming a supernova is one way that a star can end its life," says Woudt. "One family of supernovae, Type la supernovae, are of particular interest to cosmologists as they can be used as 'standard candles' to measure distances in the Universe - and to calibrate the accelerating expansion that is driven by dark energy."

It's hard to say when - or even if - V445 Puppis will become a Type la supernova. The matter piling up on V445 Puppis' surface from its companion star will eventually cause it to exceed the Chandrasekhar limit (named after Indian physicist Subrahmanyan Chandrasekhar), which is nearly 1.4 times the mass of the Sun. Once it reaches this threshold it should explode like a stellar thermonuclear bomb.

"One of the major problems in modern astrophysics is the fact that we still do not know exactly what kinds of stellar systems explode as a Type la supernova," says Woudt.

"Whether V445 Puppis will eventually explode as a supernova, or whether the current nova outburst has pre-empted that pathway by ejecting too much matter back into space is still unclear," he adds.

"But we have a pretty good suspect for a future Type la supernova!"

If V445 Puppis explodes as a Type Ia supernova, it will be easily visible with the naked eye. It will appear as bright in the night sky as the planet Jupiter, even though V445 Puppis is 25 000 light years away.