Prevention is better than cure - says Van As 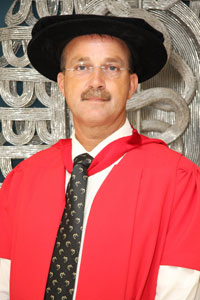 Professor Sebastian Van As delivered his inaugural lecture on 25 November.

Society must prevent injuries to children, and UCT should not be shy to lead the way, Professor Sebastian Van As said at his inaugural lecture, Ex Africa Semper Aliquid Novum (There is always something new from Africa), on 25 November.

Van As, head of the Trauma Unit at the Red Cross War Memorial Children's Hospital, said trauma is the leading cause of the death of children between the ages of one and 18 in South Africa. Each year, approximately one million children die from the three big killers: motor vehicle accidents, drowning and burns.

Van As drew his argument from recommendations made by the Commission for Africa, instituted by former British Prime Minister Tony Blair, which suggested a shift of emphasis from humanitarian relief to prevention to solve Africa's problems.

Research at UCT represents a wealth of information that is internationally underutilised, Van As noted. This includes the numerous novel experimental liver and liver transplantation studies at the Liver Research Centre at Red Cross Hospital, and the fact that the university's and hospital's work has made South Africa a world leader in trauma care.

According to the World Health Organisation, trauma will be the biggest killer by 2010, as other causes such as infectious diseases and cardiovascular diseases will decline in the next decade.

It's therefore a concern that there is a tendency among certain administrators to think that dedicated trauma units can be dispensed with," he said.

The development of paediatric trauma care is another area where surgeons have excelled and taken leadership. In 1984 the Red Cross Children's Hospital Trauma Unit was established and extended in 2004 when a whole state-of-the-art new trauma unit was built.

Approximately 10 000 children are treated annually in the unit, and the main causes of injuries are falls, transport-related injuries, burns and assaults.

The prevention - rather than just treatment - of child injuries in not a new concept as Red Cross established the Child Accident Prevention Foundation of Southern Africa, popularly known as Childsafe, in 1978. The vision of Childsafe is to create a safer world for children, with its activities focusing on research, education, environmental change and recommendations for legislation.

Childsafe's most prominent initiative was the support for the child-friendly New Firearms Bill, which reduced the number of cases of children treated with gunshot wounds at Red Cross by 70% since 2000. "It also had a drastic effect on national mortality as a result of gunshots, reducing it by 50%," Van As said.

"Whereas there are significant campaigns to increase vaccinations for infectious diseases, child-accident prevention is seriously neglected in the Third World. Too often, it is forgotten that child safety is a matter for adults."

Van As believes that the recently established Global Health Institute at UCT will contribute significantly to global health, but it requires a strong trauma component.