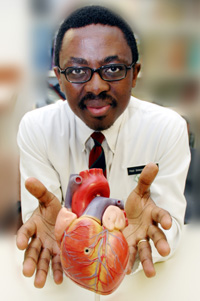 While infectious diseases such as HIV and tuberculosis may hog the daily headlines in Africa, the just-launched Sub-Saharan Africa Centre for Chronic Diseases (SSACCD), hosted by UCT, is placing in its crosshairs the growing tide of chronic and lifestyle diseases that is sneaking up on the continent.

As it has no building or labs of its own, the centre is hosted by UCT's Department of Medicine, with its secretariat - which will keep an eye on the collaborations - headquartered in the newly-renamed Bill Hoffenberg Conference Room at Groote Schuur Hospital.

The bulk of the SSACCD's funding comes from the National Heart, Lung and Blood Institute, part of the National Institutes of Health in the US, which has set up 10 similar centres of excellence in other corners of the developing world. (Africa now hosts three; the other two are based in Kenya and Tunisia.)

The South African centre takes its mandate from a landmark paper, The Burden of Non-Communicable Diseases in South Africa, which appeared in the UK-based journal The Lancet (volume 373, issue 9693) in September this year. Penned by a group of scholars affiliated to South African, Australian and Swedish universities, the paper paints a worrying picture.

"South Africa is in the midst of a health transition that is characterised by the simultaneous occurrence of epidemic infectious diseases and a rise in non-communicable diseases, in a population facing a heavy burden of perinatal and maternal disorders, injury and violence," it reads.

Headlining this rogues' gallery of 'lifestyle' diseases are cardiovascular diseases, type 2 diabetes (the most common form of diabetes, it's also been called non-insulin-dependent diabetes), cancer, chronic lung disease and depression. These, say the authors, are the "major non-communicable diseases now reaching epidemic proportions in the former socialist states and low-income regions of the world".

This rise, over the past 15 years of political transition in South Africa, is partly driven by an increase in risk factors in both urban and rural areas, and, despite the devastations of HIV/AIDS, the country's ever-ageing population.

One World Health Organisation study estimates that non-communicable diseases caused 28% of the country's total burden of disease, measured by disability-adjusted life years, in 2004.

In response, the SSACCD aims to "design novel ways to treat and prevent chronic diseases at the community level," says Professor Bongani Mayosi, head of the Department of Medicine at UCT and one of the authors of the Lancet paper. "At the centre, we'll test these models for effectiveness and make them available to ministries of health to implement throughout their health systems."

Looking at the sheer scale of the problem, the centre will have its work cut out for it.