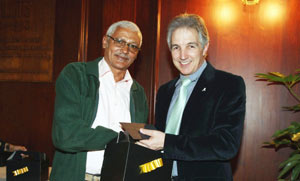 Time off: VC Dr Max Price bids farewell to William Melenephy, who retires after 37 years of service at UCT.

Both demanding and fulfilling is how retiring staff members described their time at UCT, as the university bid them farewell at the Retirees Dinner on 12 November.

One of these was William Melenephy, whose 37 years of service had its ups and downs. Melenephy said he had met many interesting people at UCT, in particular foreign visitors, and fondly recalls the support he got from colleagues.

He also remembers the bad old days at UCT. As a cleaner in the 1970s, he and his colleagues were often instructed to perform extra duties, such as assisting technicians in the animal unit, but were never paid for these. And coloureds at the time were barred from using the same facilities as their white counterparts. 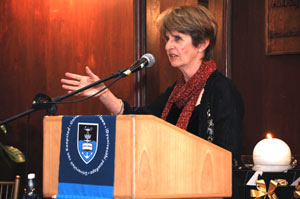 This is the shame of that time, as psychiatrist Associate Professor Denise White, puts it when she presented the official retirees response at the dinner. As a student at UCT in the 1960s, there were no Africans in her class, and coloured and Indian colleagues were not allowed to go near white patients at Groote Schuur Hospital.

White also remembers when, after Chris Barnard's landmark heart-transplant, students achieved celebrity status because of their association with Groote Schuur, and were often seen signing autographs for tourists. She said that, as retirees, they had been privileged to have been part of a momentous passage from apartheid to democracy, with the Faculty of Health Sciences now fully integrated.

"However, there is still a long way to go for the ills of the past to be fully redressed," she acknowledged.

White challenged fellow retirees "not to go home and feel sorry for yourself", but to continue making contributions as the need for their services is so great. This was in response to vice-chancellor Dr Max Price's earlier call that retirees should consider offering their services to students in new capacities.

As one "retiree to other retirees", chair of Council Archbishop Njongonkulu Ndungane assured the special guests that there is life after hanging up their jackets, "and the greatest joy in retirement is that you do what you want to do, not what you must do".