New African dinosaur was very down to earth

Strolling: A newly identified African dinosaur, Aardonyx is thought to be among the first in the sauropod line to walk on all fours, as shown in this illustration by co-discover Dr Matthew Bonnan.

Just a year or so after its release, Professor Anusuya Chinsamy-Turan may have to make a few revisions to her children's book, Famous Dinosaurs of Africa, now that a new and very special African dinosaur, named Aardonyx celestae, has been identified.

She had a hand in the process, though. Chinsamy-Turan is part of the international team that revealed Aardonyx not just as the newest face on the African dinosaur scene, but also as a pivotal piece in the puzzle on dinosaur evolution. (The dinosaur derives its genus name Aardonyx, meaning 'Earth Claw', from the fact that its large, earth-encrusted foot claws were among the first bones to be discovered, while the species name, celestea, is a nod to Celeste Yates, wife of co-discoverer Dr Adam Yates, for her work on the fossil.)

Unearthed in the Free State, the vegetarian Aardonyx is said to date from the Early Jurassic period, about 195 million years ago. Not a full-grown adult when it died, Aardonyx was about seven metres long and about 1.5 m high at the hips when on all fours.

And while it was bipedal, meaning it could also walk on its hind legs only, Aardonyx is of particular interest to palaeontologists exactly because it could also move about on all fours. That and other family traits suggest that Aardonyx was close to the common ancestor of the - much more imposing - large quadrupedal (walking on all four legs) and long-necked dinosaurs, the sauropods, say the discovers in the latest Proceedings of the Royal Society B. 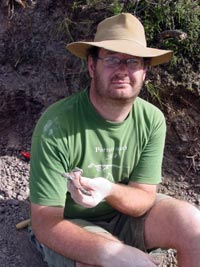 Sauropods were the largest animals to walk on land. (Family members, the tree-browsing Brachiosaurus, were the first dinosaurs spotted in Steven Spielberg's first Jurassic Park.) With their long necks, tree-trunk legs and whip-like tails, some exceeded 30 metres in length and weighed about 100 tons.

Aardonyx is thought to be an important step in the evolution towards the sauropod condition.

"Aardonyx lies at the very heart of the transition from earlier two-legged 'prosauropod' dinosaurs to the true four-legged sauropods," says Adam Yates (pictured left with a part of the Aardonyx skull - photo by Dr Matthew Bonnan), based at the Bernard Price Institute for Palaeontological Research at Wits University, and a member of the team that first dug up the fossil.

Aardonyx also moves back the timeline for when sauropods and near-sauropods first walked on all four legs, "a trend that started very early in these dinosaurs, much earlier than previously hypothesised", says Dr Matthew Bonnan, a vertebrate palaeobiologist at Western Illinois University in the US.

"The bones of the forearm are shaped like those of sauropods," explains Bonnan. "This means that the forearm and hand could bear weight and that Aardonyx could drop onto all fours as well as walk bipedally." 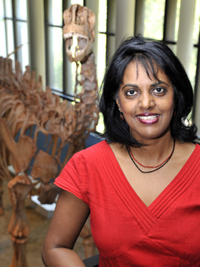 There are other features that make Aardonyx stand out. Such as the lack of cheek - a sheet of tissue spread between the upper and lower jaws - that helped in the gathering of bigger mouthfuls of browse in some earlier plant-eating dinosaurs.

"This came as a surprise as some early true sauropods still apparently kept their cheeks," says Wits' Yates. "In short, the evolution of sauropod feeding was a more complicated affair than we previously thought."

It was UCT's palaeobiologist Chinsamy-Turan (left) of the Department of Zoology who pinned down Aardonyx's age - it was no more than 10 years old - with her analysis of the bone microstructure of the dinosaur's ribs and shoulder blades.

"It is quite amazing that, after 195 million years of burial and fossilisation, the microstructure of the Aardonyx bones still retains clues about various aspects of its biology," says Chinsamy-Turan.

Enough for a new chapter in her book, perhaps.