Invisible mystique and beauty of the supramolecular world 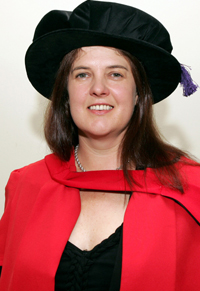 The joy of supramolecular chemistry lies in the great beauty of molecules and their structures, even though chemists can't actually see or work directly with the objects of their interest.

This was noted by Professor Susan Bourne of UCT's Department of Chemistry in her inaugural lecture, Achieving useful properties through weak interactions, on 27 October.

Bourne describes her work as a "personal journey", which led her to her main area of interest: the understanding of the three-dimensional structure of molecules.

"Structure is critically important in molecules," says Bourne. "A small difference in structure can make a big difference in a molecule. For example, people often believe a molecule taken from a natural source, such as the Vitamin C in an orange, is somehow different from the same chemical made in a lab - which, as chemists, we know is absolute nonsense."

As a supramolecular chemist, Bourne's focus is on weak interactions between molecules that allow them to hold together, particularly in the crystalline solid state.

The advantage of supramolecular chemistry is its potential to make less robust, more responsive materials - useful substances that can respond to changes in their environments.

Can we predict how chemical components will arrange themselves in a crystal structure?

Could we make functional responsive materials - things that are capable of either responding to changes in their physical environment, or of having some use, such as storing gases or other molecules?

Is it possible to make molecular-sized machinery, as we've seen in science fiction movies?

Bourne noted that the field has already made some progress in the study of predictable crystal pattern motifs, and has had promising results in making functional materials.