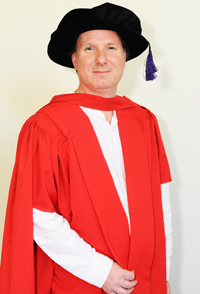 "For all we know, dark energy might as well be flying pianos," quipped cosmologist Professor Peter Dunsby, of UCT's Department of Mathematics and Applied Mathematics, in his inaugural lecture on 21 October.

Titled Blunder or Brilliance? Was Einstein right about being wrong?, Dunsby's lecture tackled the mysterious field of dark energy, a cosmological constant first proposed by Albert Einstein as a way of explaining his idea of a static universe.

"His field equations led him to a model of an expanding universe, but he didn't want this. So he added a term - a cosmological constant - which led to a static universe."

Dunsby explained that by effectively using dark energy to balance gravity, Einstein created a model that was so highly unstable that any matter added to the universe would cause it either to collapse to a singularity or lead to accelerated expansion.

"This led Einstein to his famous quote, in which he said that this attempt was the biggest blunder of his career," said Dunsby. "But now, the idea of dark energy has made a huge comeback."

Dark energy is now used to explain recent observations that the universe appears to be expanding at an accelerating rate. Without this mysterious dark energy, it is a struggle to fit our current model of the universe to a range of cosmological observations. However, having a non-zero cosmological constant does not come without some problems.

"If one calculates the energy density due to the vacuum of space- time - which we believe to be the cosmological constant - the answer is about 120 orders of magnitude bigger than what we observe. This is a huge blunder - probably the biggest discrepancy between theory and experiment in the whole of science."

In the standard model of cosmology, dark energy currently accounts for over 70% of the total mass-energy of the universe - but at present, cosmologists don't know what this matter actually is.

Dunsby notes that cosmology has made huge knowledge leaps in the last decade.

"But knowing something doesn't mean understanding it, and the gap between knowing and understanding has actually widened over the last few years," he said.

"This is why it's so exciting being a cosmologist right now."