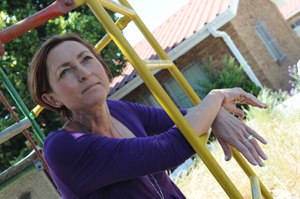 In conversation, Dr Linda-Gail Bekker often falls into the habit of speaking of the cross-fertilisation between HIV and tuberculosis almost as a distinct third disease - named TB-HIV - that is in some ways divorced from its parent epidemics.

That may not be too far off the mark, agrees Bekker, recent winner of the UK's Royal Society Pfizer Award for her work with the Desmond Tutu HIV Centre, part of UCT's Institute of Infectious Disease and Molecular Medicine.

South Africa had already-scary levels of TB even before HIV was thrown into the pot, she explains. The fact that the country has witnessed a six-fold increase in TB rates in only 20 years would suggest that we're losing the battle against the "unholy synergy" of the two diseases, says Bekker.

Which means it's time to think out of the box.

For one thing, scientists, clinicians and policymakers fall into the mistake of merely applying what they already know of TB to TB-HIV. That may not be the wisest course of attack, says Bekker.

"It cannot be business as usual."

To come up with novel treatments, Bekker and her 200-strong team of scientists, project leaders and nurses are applying a technique known as molecular epidemiology, to look at both the genetic and the environmental factors associated with TB-HIV infection. They hope that this attempt to "fingerprint" the dynamics of TB spread will suggest new ways to curb the epidemic.

"We have to break the cycle of infection," she says.