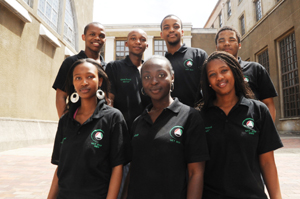 The winning team: Wandile Mamba, back left, with Mpho Makhanya, Mduduzi Godlo and Mahleke Matome and, front, Thato Tukisi, Abigail Nyarko-Boakye and Akhona Mbanga were part of the Black Management Forums' UCT student chapter that was rated among the best three in the country.

When Wandile Mamba saw a neatly-dressed delegation from the Black Management Forum (BMF) entering the Jameson Hall in his first year, he knew he wanted to be just like them one day.

"It was our goal from the beginning to run not only good programmes but also to be the best," he said.

Johannesburg-born Mamba is a second-year student of chemical engineering and a vice-president of the newly elected Students Representative Council. His involvement in student leadership (he was also part of the Hip Hop Club and UCT Leadership Programme) also earned him the 2009 Most Outstanding Student Leader in a Society/Student Organisation at the recent UCT Pick Â´n Pay Student Leadership Awards.

"We don't want students to emerge from university with only academic knowledge," he said. "They must also have an understanding of what is happening in South Africa and know how to address the country's socio-economic challenges."

Mamba praised his members "for making UCT shine on a huge platform". His struggle now is to balance studies with his student leadership work.