Success in triplicate for TB researchers 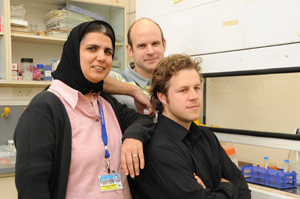 Three specialists at UCT's Lung Infection and Immunity Unit have won substantial US fellowships for their doctoral studies on tuberculosis.

Recently, Drs Shahieda Adams, Jonny Peter and Richard van Zyl-Smit received Fogarty International Clinical Research Fellowships, awarded by the US National Institutes of Health's (NIH) Fogarty International Centre. In addition to the funding that comes with the fellowship, Adams, Peter and Van Zyl-Smit travelled to the US for orientation and training at the NIH in Bethesda, Maryland.

The trio's research focuses on various aspects of TB diagnosis and infection.

Adams, 44, an occupational medicine specialist, is running a screening programme - the first of its kind - for healthcare workers at primary-care clinics in high-burden settings in the Western Cape, including Delft, Nyanga and Khayelitsha. "My research is focused on evaluating tests for latent TB infection and the potential determinants of tuberculosis infection in healthcare workers, such as host, environmental and occupational factors," she explains.

In turn, Peter, 32, works on sputum induction, a technique used to get a sputum sample for diagnosis when the patient is unable to produce spit naturally. He is investigating how sputum induction - it usually involves vaporised salt-water - stands up to other techniques, such as the more expensive and uncomfortable bronchoscopy. Peter is also trying to establish whether sputum induction, which is commonly used in hospitals, can be applied at primary-care clinics.

Finally, Van Zyl-Smit, 36, is trying to provide some laboratory evidence for the strongly-assumed but never conclusively-proved link between smoking and TB. The problem is that while most are convinced that smoking is indeed a leading risk factor for TB, other co-occurring risk factors - alcohol abuse, overcrowded conditions, poverty - tend to muddy the waters. "No-one has ever shown what smoking is doing to the immune system when it comes to TB," says Van Zyl-Smit.

The three researchers are supervised by Associate Professor Keertan Dheeda.