Education failure is one of 'tragic proportions' - Kallaway 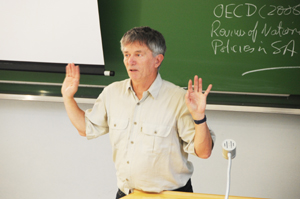 So said Emeritus Professor Peter Kallaway, based at the University of the Western Cape and a UCT research associate, at a public lecture, Education– What is to be Done? on 15 October, in which he outlined problems facing post-apartheid education, and suggested possible solutions.

"My theory is that the basis of the problem lies in a world view that– is derived from a romantic view of education," said Kallaway. "There was an assumption that if one removed all discipline in schools, one would liberate the students to pursue their own learning and thus cause 'a hundred flowers to bloom'."

The second issue, argued Kallaway, is the curriculum itself.

"To make matters immeasurably worse, the new curriculum did away with the very structure that would have given the majority of our modestly-trained teachers a raft to cling to - namely the textbook knowledge that was the major aspect of their own training as teachers."

He said the new curriculum requires a "serious investigation, which I think lies at the core of many of the problems I have described - but this is the holy cow we are never allowed to criticise".

His proposals for improvement include a focus on training teachers, providing head teachers with the means to operate their schools effectively, and a drive to promote teaching as a profession.

"If the teacher is deprived of the means of enforcing physical discipline in big, overcrowded classes, and [can't] promote positive learning, there is every chance of an explosive mix."