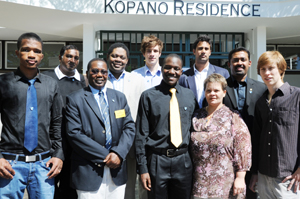 The Kopano residence has started a society and a fund to re-establish relations with old boys and to provide an academic and financial fillip to current students.

The initiative is driven by alumni and the Kopano House Committee, who injected R100 000 to kick-start the fund. They hope to raise R10 000 annually.

At the launch on 3 October, fashion designer and former resident Gavin Rajah contributed R10 000 to ensure that the first scholarship is realised in 2010. He challenged all former 'squirrels' to equal or better this.

Jerome September, Kopano's assistant warden, said the initiative is a vehicle for past students to continue contributing to the residence. The old boys play a constructive role to ensure that positive traditions are maintained at the residence, he added.

"They present us with an opportunity to showcase the remarkable achievements of past Kopano residents, and to promote them as positive role models."