Noero one of only six architects to show at Iziko 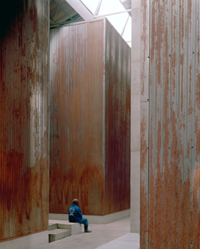 High design: Prof Jo Noero is one of only six architects to be exhibited at the Iziko National Gallery

With his new exhibition, the internationally recognised Professor Jo Noero of UCT's School of Architecture and Planning, has become one of only six architects to be exhibited at the Iziko National Gallery.

Titled The Everyday and the Extraordinary, Noero's exhibition was opened on 9 September and showcases three decades of his writings on, teaching and practice of architecture.

Each decade can be viewed as a reflection of the state of the country. In the 1980s, Noero was an anti-apartheid activist and his work reflects his social conscience. He was involved in building projects that played a role in uplifting local communities. His first clients were Bishop David and Maggie Nkwe, for whom he built a home. He went on to design the Orlando Children's Orphanage for Maggie. David Nkwe introduced him to Desmond Tutu, who appointed him as diocesan architect.

"The exhibition is dedicated to the memory of Bishop David Nkwe, who was an inspiration and a friend," said Noero at the opening.

Noero joined UCT as director of the School of Architecture and Planning in 2000, a position he held until 2005. He continues to lecture, and is involved in the school at all levels. An honorary fellow of the Royal Institute of British Architects, Noero has lectured and is published and exhibited throughout the world.

The Iziko National Gallery describe Noero as "one of South Africa's most celebrated architects."

Noero received the Institute of South African Architects (ISAA) National Award of Merit for the Duduza Resource Centre, and the following year he claimed the ISAA Award for Excellence for the Soweto Careers Centre. He was also the first South African to receive the prestigious Ruth and Ralph Erskine Scholarship from the Nordic Institute of Architects.

The Everyday and the Extraordinary runs until 30 November.