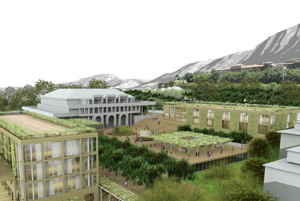 The new building development on middle campus marks a number of firsts for UCT's commitment to environmental matters. As a result, these will be the first buildings on campus to be rated by the Green Building Council of South Africa, which has given the project a three (out of five) star rating.

Environmental concerns, such as energy saving, recycling and water attenuation, have played a crucial role in the design and construction processes of the R200 million development, which will include a new administration building, house the new Graduate School of Economics and extend the Kramer Law Building.

"Firstly, we placed great importance on the orientation of the building," explains John Critien, executive director of UCT's Properties and Services. Its faÃ§ade is north facing, which will allow for maximum use of sunlight to keep the building warm during winter and bright throughout the year. All light fittings will use the best available low consumption bulbs, with motion sensors, where possible, to lessen power usage.

The buildings will also be equipped with innovative, efficient new ventilation solutions.

"We still have some really old ventilation units on upper campus, which consume substantial amounts of water and electricity. The new system will cut down these costs," he says.

Another concern was water attenuation. Because rainwater running freely down slopes can erode and damage property, the development includes attenuation ponds, which create retention areas for water to accumulate, and finally sink harmlessly into the ground.

This, says Critien, is another first for UCT, and in line with new city bylaws on storm water attenuation aimed at the preservation of the Cape rainforest.

Recycling was a key feature of the demolition process, with all steel, concrete, bricks and sand removed for re-use elsewhere. A stone crusher was on site to process the rubble, and steel was taken away to be melted down.

"Recycling not only makes perfect sense, but it's also cost-effective," says Critien. "We incorporated recycling in the cost planning, and although it does take some extra effort to separate raw materials and crush rubble, the process actually reduced the development costs."

The development, expected to be completed by 2011, is aimed at lessening the load of upper campus, which, Critien quips, has become "sufficiently densified".

The economics building will house two lecture theatres, and the new administration building will be occupied by staff currently on upper campus, as well as the International Academic Programmes Office.