Cosmology and the universe in a nutshell 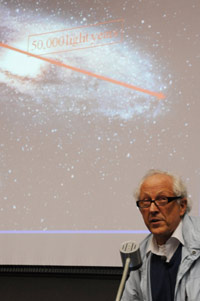 In trying to pin down the origins and nature of the universe, cosmologists - reams and reams of maths and data notwithstanding - occasionally have to fall back on philosophy and metaphysics, explained Emeritus Professor George Ellis (left) at the Faculty of Science's Distinguished Alumni Lecture on 16 September.

In his breakneck introduction to the topic, Ellis noted that astronomers and cosmologists have made great strides in their knowledge of the physical universe, from its Hot Big Bang early era - when it was made up of nothing other than hot gas and radiation - into today's expanding universe, crammed with billions of galaxies, each in turn holding billions of stars and planets. Mathematical models and observations - such as of the cosmic microwave background, the leftover radiation from the Big Bang - bear out this Standard Model of Cosmology.

There are other scientifically un-answerable issues - such as how the universe started, and why it has such a very special nature that makes it a hospitable environment for life to exist on planet Earth.

"The problem is you can't do the relevant experiments - you can't rerun the universe, you can't reach the energies and densities," said Ellis.

Instead, cosmologists and mathematicians have to resort to conjecture and speculation to fill these gaps in knowledge. So, for example, some have mooted the idea of a multiverse, i.e. a set of multiple actually existing universes; each, perhaps, with its own set of physical laws.

But because this hypothesis can't be tested, it's not quite science, argued Ellis.

"From now on," offered Ellis, "cosmology is going to have to interact with philosophy much more and much more consciously than it has done in the past."