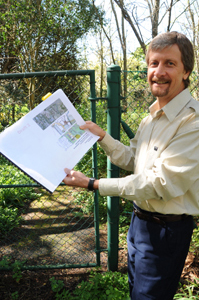 When Dr Richard Hill braved showers to visit a site earmarked for a new building at UCT last year, part of the multi-millionrand middle campus development project, he wanted to understand the environment better, the usual procedure at the beginning of an environment impact assessment process.

But his walk along the Lover's Walk-Burg Road-Glenara site on 5 September 2008 with Geoffrey de Wet, director of UCT's Physical Planning Unit, unearthed a population of Cape Rain Frogs (Breviceps gibbosus), a threatened species.

At the time, Hill, of the Department of Environmental and Geographical Science, was unhappy about the university's proposal to construct the Student Administration Building there, arguing for the conservation and enhancement of the green belt that separates the middle campus from neighbours in Rondebosch.

A member of UCT's Building and Development Committee, Hill also found that the frogs live in burrows under the mowed buffalo lawns of the vice-chancellor's garden. This frog species is classified as "vulnerable" in the South African Red Data List of threatened species.

The Cape Rain Frog was apparently the first African frog to be described by Western science, in 1550 AD. It is found in a limited range in Cape Town and Piketberg. In the southern suburbs its range is being drastically reduced by the increasing density of suburban re-development and paving.

Given their vulnerable status, conservation of these frogs and their environment has been prioritised in the UCT Green Campus Action Plan.

The building was subsequently moved to the middle campus after Dr Henri Comrie, an urban designer, reported to the Building and Development Committee that the new plaza north of the Faculty of Law should be enclosed by three buildings, including the new School of Economics to the east and another building on the west for student administration.

"Sheltered by the new buildings, students will be able to sit out in the sun and have food and drinks between lectures. The security of users is enhanced by 'eyes in the buildings' overlooking the square."

Hill was quick to point out that the issue is more about maintaining the healthy environment in the Japonica Walk-Bremner Woodland-Glenara green belt than about the frog per se. "The frog is an indicator species that says we have been managing our environment very well. The Glenara site is the core of this green belt because it has been fenced off from public access for so long," he explained.

Hill also contended that UCT needs more storm water retention systems to protect downstream properties from flooding. This site is a perfect area for achieving that. With the frog population in mind, an environmental assessment by a specialist is to be commissioned soon to plan the storm water system.

"In South Africa there is a great need for social and economic development. Planning must not be seen as a competition between frogs and people for environmental space. We need green belts and development."