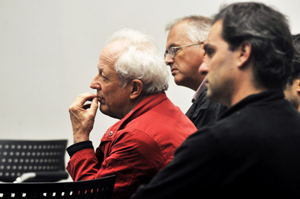 Big questions: Emer Prof George Ellis had plenty to ponder at the The Foundations of Space & Time meeting on quantum gravity.

Just as hosts Dr Jeff Murugan, Dr Amanda Weltman and Emeritus Professor George Ellis had planned, The Foundations of Space & Time: Reflections on quantum gravity stood apart from most meetings on the topic by dint of its mixed bag of specialists, topics and even aims.

For one thing, the five-day meeting, held at the Stellenbosch Institute for Advanced Study in August, was partly a tribute to Ellis, UCT's cosmologist laureate, and partly an opportunity to bring together some of the (other) foremost minds working on the topic, one of the most challenging in theoretical physics.

Quantum gravity attempts to marry the fields of quantum field theory and general relativity into one clear unifying theory - an ambitious 'Theory of Everything', as some have dubbed it - a pursuit that has inspired but also frustrated some of the world's finest minds for the better part of a century.

As no single school of thought has as yet come up with such a fundamental theory of time and space, Ellis, Murugan and Weltman decided to throw a catalogue of viewpoints at the problem. They called together string theorists (such as Murugan and Weltman), champions for loop quantum gravity (who count Ellis among their number), and as many other approaches as they could muster.

Delegates hailed from as far afield as Oxford University, the Inter- University Centre for Astronomy and Astrophysics in India, the University of California, Utrecht University in the Netherlands, the Albert Einstein Institute in Germany, and the University of Rome, to name but a few. The spectrum of topics under debate was equally diverse, ranging from string theory and loop quantum gravity to spin foams and causal sets.

But even for these great minds, there was something of a learning curve.

"There are various approaches to quantum gravity that start from quite different viewpoints, and there is a tendency in the field for people from one group not to interact much with those from other groups," says Ellis. "So some of those there were meeting ideas from other approaches in a new way, and probably for the first time."

The meeting may have been chaotic at times, but it showed there there's still plenty for everyone to learn about quantum gravity, observes Murugan.

"What is clear is that even though the field is most certainly one of the most difficult in physics," he says, "it is still very much alive and as exciting as when Einstein was thinking about these issues in the 50s." News from the meeting will go further, as Cambridge University Press has agreed to publish a book drawn from the results of the gathering. Murugan, Ellis and Weltman are currently fine-tuning the text.