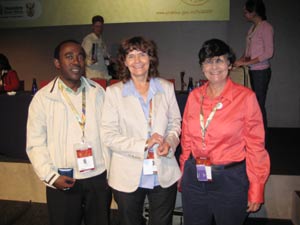 Statistical scientists Professor Linda Haines and her former student, Dr Legesse Debusho, have won the 2009 Sichel Medal for the best paper by South African authors in a statistical journal.

Titled V- and D-Optimal Population Designs for the Simple Linear Regression Model with a Random Intercept Term, the winning paper examined the optimal choice of points at which to experiment when a particular type of model, namely a linear mixed model, is appropriate for the analysis of a data set. It was published in the Journal of Statistical Planning and Inference in 2008.

This is the second year in a row, and only the second time that UCT has claimed the Sichel. In 2008, Associate Professor Iain MacDonald of the School of Actuarial Science became the first UCT academic to win for his work with co-author, Professor Walter Zucchini, a former UCT academic, now at the University of Göttingen.

"I am delighted to have won the Sichel Medal together with Legesse," said Haines. "Our paper is based on Legesse's PhD work, which was performed under my supervision, and which represents a great deal of hard, enjoyable, collaborative work."