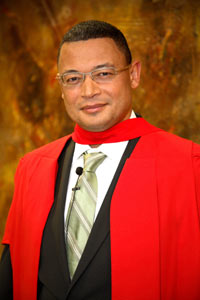 Professor Edgar Pieterse, director of UCT's African Centre for Cities in the Faculty of Engineering & the Built Environment, delivered his inaugural lecture, titled African Cities: Grasping the Unknowable, on 26 August.

Almost all future urban growth in African cities will take the form of slum growth. This is just one of the stark differences between urbanisation in Africa and elsewhere.

So noted Professor Edgar Pieterse, director of UCT's African Centre for Cities in the Faculty of Engineering & the Built Environment, in his inaugural lecture on 26 August.

Despite the fact that Africa experiences the fastest rate of urbanisation compared to all other regions, with United Nations predicting that the continent will double its urban population in the next two decades, there is an "absence of a well-rounded body of thought on the specificities of African urbanism," he said. Pieterse argued that there has been a "tendency to focus on individual or micro practices in order to surface nuance, texture, variability, diversity and of course, contingency".

"We need to find ways in which we can clarify the knowledge agenda that will be able to articulate macro-trend data and perspectives with insights about the novelty of contemporary urban life as it comes into being at this late capitalist moment, when Africa remains an afterthought, an invisible placemat for larger power struggles, and the globalised allegory for failed modernisation," he said.

Pieterse described African macro-urbanisation trends, starting with the fact that the continent is still in the beginning of its urbanisation transition, with only 38% of the population presently living in cities. Another trend is that the vast majority of African urbanites reside in small cities with populations of less than half a million, which is "fundamentally different to the typical scenario of megacity explosions that is popularly associated with urbanisation".

Another unique and concerning trend is slum growth.

"Informal, autoconstructed, makeshift shelters house 62% of African urbanites. In other words, the shanty city is the real African city," said Pieterse. "Clearly, for both what we know and do not know, the African city is indeed an edge, a site of danger, for there are an impossible many dimensions to grasp at once."