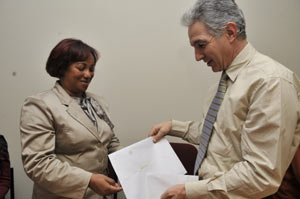 Unique teaching methods, a great passion for learners and going out of her way to help them has won teacher Lavinia Boer the fourth Stella Clark Teachers Award from the Centre for Higher Education Development at UCT.

Nangamso Hlathana, the UCT student who nominated Boer, had a choice of R1 500 or an iPod.

Stella Clark was a senior lecturer in the Language Development Group in the Centre for Higher Education Development until her death in 2005. The award was established through donations from her family, friends and colleagues from South Africa, the UK, the US and Japan.

It honours teachers who go beyond the call of duty to provide excellent education in often difficult circumstances. Annually, UCT students are invited to nominate secondary school teachers who have helped to make it possible for them to come to university.

Boer, who studied at UCT in 1991, used to teach Afrikaans at Marian Roman Catholic High School, where her learners called her a 'living legend'. Hlathana was one of them, and said Boer was a hard-working, committed and disciplined individual - a role model to both learners and colleagues.

"She had a great passion and went the extra mile for her learners, especially those who were Xhosa speaking," she recalled.

Hlathana said Boer used to let them play games and act scenes from prescribed books as some of her teaching methods. Boer also taught female learners life skills and started a hiking club with another educator.

"When she left in 2007 it was the most devastating news for us," said Hlathana. She, however, continued to tutor them in her home lounge and helped Hlathana apply to study at UCT.