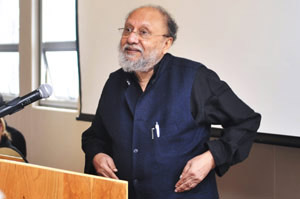 Universities must be the repositories of all levels of knowledge and should be able to confront the reality of diverse systems of information when processing knowledge.

So said Indian political psychologist and social theorist, Professor Ashis Nandy in his address, Imagining a South Asian University, during a Sawyer Seminar keynote address at UCT this week.

A leading public intellectual, Nandy was among a group who 10 years ago brainstormed the concept of a South Asian University - where seven member-countries in Asia are pooling resources to create a centre of excellence in which students and researchers work together for human advancement.

Nandy said universities are increasingly becoming the centres of knowledge management rather than of knowledge creation.

Nandy gave the example of 100 public institutions in India that offer music - but not one respected musician has emerged from their programmes in the last 70 years.

"They (musicians) came from different processes (of education)."

Nandy said there were public intellectuals of all kinds outside universities who process knowledge for the sake of society. 'We had to keep that in mind, too, when imagining a South Asian University.'

Nandy said the challenge for such a South Asian university rests in its capacity to address issues of radical diversity.

"It is, therefore, my contention that the university, as it encroaches upon newer areas of life and further marginalises alternative bastions of knowledge, is itself being emptied of urgency and increasingly turning into an appendage of the global political economy."