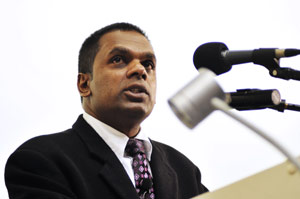 Champions: Prof Nithaya Chetty called on academics to make an unrelenting and stronger case for the importance of academic freedom.

While it is something of an international coup to have it enshrined in the Constitution, it would be "presumptuous" of South African academics to assume that academic freedom is always going to come easy.

This was the message of Professor Nithaya Chetty of the University of Pretoria as he delivered UCT's 2009 TB Davie Memorial Academic Freedom Lecture on 12 August.

But there are also threats from within, said Chetty. Among these he singled out the marginalisation of the academic voice on matters that concern the academic functioning of universities (Senates are losing their status, he cautioned), the "increasing litigious nature of universities" bred by an increasing managerialist ethos, and the growing corporatisation of research.

For much of his lecture, Chetty called on "ordinary academics' such as himself to do their bit to secure academic freedom.

"Academics need to understand much more profoundly the forces that have come to bear on our quest for an academically freer university system," he said. "It is perilous for us academics to simply insist on academic freedom without understanding and engaging with those sectors who, for whatever reasons, view things differently."

For these sectors, academic freedom is little more than "a distraction" and "a kind of irritation that is barely tolerated by many of our politicians and a growing number of university managers who are driven by their own sets of interests", he added.

Chetty also cautioned against turning the ongoing struggle for transformation at universities into a "racist discourse".

"I think that is it profoundly racist to play the race card as nonchalantly as it is often being used today to denigrate people, to deflect criticism and to stifle debate."

In the end, he noted, it will be the academics who must champion the cause.