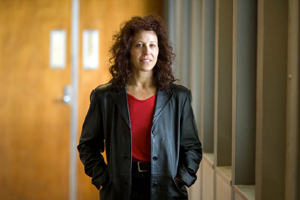 Associate Professor Rob Baum comes to UCT from Alaska in the US, by way of Australia, New Zealand and Israel, where she completed her postdoctoral research, at the Technion Israel Institute of Technology in Haifa, on gender gesture and ritual in Middle-East African refugees in the country who had fled from their war-torn homes to Israel.

As the new director of the Gordon Institute for Performing and Creative Arts (GIPCA), launched in December 2008 and underpinned by a R50-million challenge grant from the Donald Gordon Foundation, Baum is set to take on a fresh challenge in a new environment.

RB:The decision is an extension of my research. While working in Israel with Ethiopian dancers I became aware of the rich diversity in African cultures. As my research turned to trauma, especially post-traumatic stress disorder as result of war, I realised my focus was of great relevance for many African populations. Although there's no actual war here, many South Africans are extremely traumatised as a result of the disparities in class and status.

MP: So where to for GIPCA?

RB: I came here with lots of ideas, but I believe that it is paramount that I listen to my colleagues, and find out what they want. My primary role here is not to impose my own research interests, but rather to facilitate theirs. I've only been here for three weeks, and already I've received some great ideas that I hope to shape into proposals.

MP: Will your own research take a back seat?

RB: I haven't had much time to think about it! I'm still finding my feet. I'm looking for a car, a place to live, hand-me-downs ...

MP: How are you finding the job?

RB: Busy. Day-to-day facilitation of the institution is very time-consuming. We're also putting out a call for proposals in August, and I'm looking forward to supervising and collaborating in the institute's research projects.

MP: How does GIPCA compare to similar institutions around the world?

RB: It's a unique world in a bottle. Pippa [Skotnes, the former interim director of GIPCA] has put some great things in place.

In the last five or so years, consortia have grown in European and American universities, which tend to constrict the various performing arts disciplines to their own area. My understanding is GIPCA's approach, that creative writing underlines drama, and drama and dance are handmaidens. The performing arts are made up of many disciplines that have to work together. So being here is quite a dream.

MP: Finally, we have to ask about your name. Is it short for something?

RB: No, it's just Rob. My family are first-generation German refugees. For protection, we were all given first and second names that could be used as either gender, and as last names, so we could drop the 'Baum', if we wanted a stage name. But none of us did. I've never seen the need.