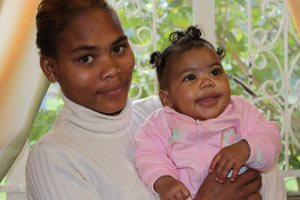 TB trial: Baby Janenique and her mother Jane, who, like other parents of babies in the trial, will wait three years until the anticipated release of the trial report in 2012 to hear whether their participation in the study has borne fruit.

Four-month-old Janenique Pienaar of Worcester made history in July when she became the first baby in 80 years to be vaccinated in a proof-of-concept efficacy trial of a candidate TB vaccine (MVA85A/Aeras-485).

This is being tested at the TB vaccine research site of UCT's South African Tuberculosis Vaccine Initiative (SATVI), in partnership with Aeras Global TB Vaccine Foundation, the Oxford-Emergent Tuberculosis Consortium Ltd and the Wellcome Trust.

Baby Janenique lives in the Boland, an area with one of the highest rates of TB in the world (14 out of every thousand), and an area in which HIV and TB are the main causes of death.

Like all South African newborns, she was given the BCG vaccine at birth to prevent her from contracting TB. While BCG is known to protect against severe forms of TB in children, it does not appear to protect against lung TB, the main form of TB. In addition, BCG itself can cause disease in HIV-positive infants.

The urgent search for a new, safe and more effective TB vaccine - for all ages, all types of TB and for those living with HIV - has seen 10 new TB vaccine candidates in clinical trials worldwide, of which SATVI is testing four at its site. SATVI is currently the largest dedicated African TB vaccine research group.

SATVI has the infrastructure and capacity to conduct large-scale clinical TB vaccine research, having conducted large-scale epidemiological TB studies in babies and teenagers as well as a Phase IV trial involving almost 12 000 infants.

"The MVA85A/Aeras-485 ('phase IIB trial', as it is called by the SATVI team) offers hope that the TB pandemic can be reversed, especially in high-burden settings like Worcester," said Professor Gregory Hussey, director of SATVI.

The trial aims to enrol 2 784 BCG-vaccinated, healthy babies, all about four months of age, from Worcester, Ceres and Robertson. Half the babies will be given the new vaccine candidate, and the other half a placebo, after which they will be followed up and monitored for two years to compare the incidence of TB in the two groups. Earlier, smaller studies have shown the vaccine to be safe in adults, children and babies.