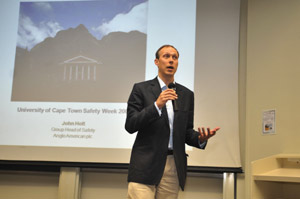 Safety Week, aimed at promoting safety awareness at UCT, was kicked off with an opening talk by Anglo American's head of safety, John Holt, on 27 July.

In his address, titled The Importance of Safety in the Workplace, Holt argued that safety didn't begin at home, but rather with the individual, and their concern for their own safety as well as the safety of others. He noted that safety awareness was especially important in larger groups, like UCT's campuses, where people are less likely to help others because they tend to think that someone else will do it.

"UCT has a responsibility to create a safe working environment," said Holt. "But like all universities, it's a society of rule-breakers, where people are encouraged to think outside the box, so it's a special challenge to persuade people to follow safety rules."

A project of the Faculty of Engineering & the Built Environment (EBE), Safety Week ran from 27 to 31 July, and featured a number of events, including discussions, presentations and demonstrations from departments in the faculty.

Safety Week was inspired, said EBE dean, Professor Francis Petersen, by his concerns about how much - or little, to be more precise - people at UCT sometimes take individual and group safety to heart. The aim of the week was to foster a culture of safety awareness.

"If you haven't got that culture, you can teach students as much as you want to in the curriculum, and while they may learn it, but they're not going to believe it."