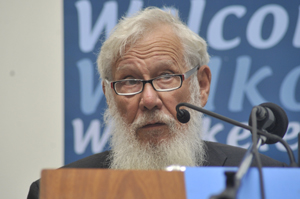 "Game engineering is all about incentives" said Aumann, who notes that when he delivers this same lecture to the business sector, he simply re-titles it Putting Incentives to Work for You.

Aumann, an Emeritus professor in the Institute of Mathematics at the Hebrew University of Jerusalem, Israel, and a member of the University's Center for the Study of Rationality spoke on the topic Practical Applications in Game Engineering.

Useful in understanding strategic interactions, in which the success in making choices is dependent on the choices made by others, game theory is applied in areas as diverse as auctioneering, road planning, and personal relationships.

Using auctions as an example, Aumann explained how the second-price, sealed bid auction concept gives bidders the incentive to bid for an items true value, making the process more profitable for the auctioneer. In a second price auction, the highest bidder wins, but only pays the value of the second highest bid. The concept earned its creator, William Vickrey, a Nobel Prize for economics.

Aumann also explained how building short-cut roads can actually cause more delays than before, as more people will choose to use a single new road over multiple older routes, which results in more congestion. He cites an example in Amsterdam, where traffic was found to move more efficiently after some of the streets were closed for repairs.

The author of over 90 scientific papers and six books. Aumann was awarded the 2005 Nobel Prize in Economics alongside Professor Thomas Schelling of the University of Maryland in the US "for having enhanced our understanding of conflict and cooperation through game-theory analysis".

Aumann was the first to conduct a complete formal analysis of the 'repeated games' which take place in long-term relationships. His research identified prerequisites for co-operation among participants where there are continuous strategic interactions. His theory of repeated games help explain economic conflicts, such as price wars between sellers of a commodity, and trade wars between countries, as well as why some communities are more successful than others in managing common-pool resources.