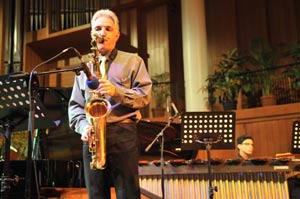 UCT's Vice-Chancellor's Concerts have traditionally been named in honour of UCT's CEOs, not because they're actually on the programme. At least, that was the case until last night, when Dr Max Price, UCT vice-chancellor and keen saxophonist, made his stage debut.

The occasion was the first of the two VC's Concerts for 2009, which showcases the young talent-in-training at UCT's South African College of Music (SACM). Price did the formal hellos, before Dizu Plaatjies gave the Baxter audience a potted introduction to African music and instruments.

This was followed by an orchestra of violinists, cellists and bassists (doing, among others, Bach's Concerto for Two Violins), another crowd-pleasing turn from students from the School of Opera (15 took to the stage for the last piece, the Gran pezzo concertato from Gioacchino Rossini's Il Viaggio a Reims), and organist Gareth Baard.

Then it was the turn of the UCT Big Band under Mike Campbell, closing, as always, the evening's festivities. But after a few pieces, they sprang the surprise of the evening.

Price stepped onto the stage, note in hand, for what all must have assumed would be the closing proceedings, but then, much to the crowd's delight, donned his saxophone instead, and led the band for two jazz standards - Bobby Timmons' Moanin' and All of Me by Gerald Marks and Seymour Simons.

Price, who's only been playing the sax for around three years, admitted to a few butterflies before the event. Just two rehearsals of about 10 minutes apiece didn't help his stage fright, either, he said.

But according to Gillian Lindner of the SACM, who puts the programme together, Price did "very well" for a novice.