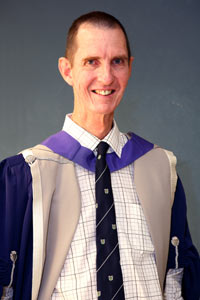 The number of people suffering from visual impairment in the world has come down significantly in the past nine years, but it is up to health-care workers to keep that downward trend going.

So said Professor Colin Cook at his inaugural lecture, Vision 2020 - The right to sight, on 22 July.

The Vision 2020 initiative was launched in 1999 by the International Agency for the Prevention of Blindness and the World Health Organisation, for the Global Elimination of Avoidable Blindness. Its purpose is to eradicate the main causes of visual impairment - cataract, glaucoma and diabetic retinopathy - and to give millions of needlessly blind people the right to sight.

"Vision 2020 is having an impact, and it is our responsibility to continue the good work," he said.

Cook drew a bleak picture of the current situation, saying that the highest burden of blindness is in Africa, the poor hit the hardest. Yet most of these cases are treatable and preventable.

Among the reasons for the persistent problem is the population boom, the ageing of the world population and inadequate eye-care services for the poor, he explained.

Cook said infrastructural and human resource developments, as well as disease control, were key to eliminating blindness. He advised, though, that the process would be like "eating an elephant - piece by piece", and team effort was required.

Essential to this would be the establishment of 4 000 programmes around the world, with a chain of training, supervision, and support extending from community level up to the tertiary level.

UCT can and should make a significant contribution, Cook argued.

"One of the greatest impediments is the lack of human resources in Africa. UCT is strategically well placed to train clinicians who are competent to deal with individual patients and who have a good public health perspective."