The value of numbers 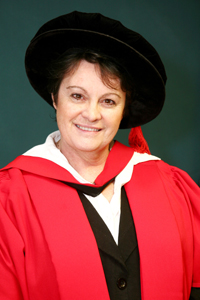 At first glance it may seem little more than a statistician's vanity to put an actual number value to the quality of life, but as Professor Jennifer Jelsma illustrated in her inaugural lecture, The Quality of Life May Be More Important Than Life Itself: But how do we quantify it?, on 15 July, there are many good reasons for doing so.

Jelsma, head of UCT's Division of Physiotherapy, showed that the merits of quantifying the health-related quality of life (HRQoL) are commonsensical. (Quality of life, as a concept, is too broad for some purposes.) For one thing, HRQoL proves more than handy in planning health interventions and policy.

"If we can't measure outcomes," said Jelsma, "then we're not going to expend resources on improving those outcomes."

Jelsma then looked at the pros and cons of two systems used to measure HRQoL - the Global Burden of Disease (GBD) measure and the EQ-5D instrument.

She reported that a study she and colleagues had conducted in Zimbabwe had quickly exposed some telling shortcomings of the GBD. For starters, it didn't always reflect the concerns of specific groups.

Jelsma found, for example, that the GBD (and local Zim health professionals) rated conditions such as migraines, dementia and quadriplegia as the most burdensome. Yet township residents viewed dementia, as a case in point, as a natural part of life, and were far more worried about conditions related to infertility, which scored low on the GBD.

"Local people felt that having a child was far more important than a lot of the other disabilities," said Jelsma.

The more numerically-nuanced EQ-5D - a measure Jelsma and colleagues contributed to - not only weighs such cultural variation, but is also more flexible. While the GBD would, for example, assign the same value to amputation before and after treatment (so why treat?), EQ-5D and its scoresheet, known as EQ-5D-Y, computes even relatively small changes in health status.

It was a study in the UK using EQ-5D - which showed that more Brits rated a number of conditions as a fate worse than death - that inspired the title of Jelsma's lecture.

Jelsma and colleagues have since used the EQ-5D, which they've translated into both Shona and isiXhosa, for an early study on the use of anti-retrovirals to treat HIV, and on a wellness programme with factory workers. In both cases the EQ-5D, when used to measure outcome, led to better self-reported HRQoL.

The division has more local and international studies with EQ-5D in the pipeline, including one on chronic-pain control and another on the use of the Nintendo Wii game console with children with hemiplegia (where one half of the body is disabled).