Allergy burden nothing to be sneezed at 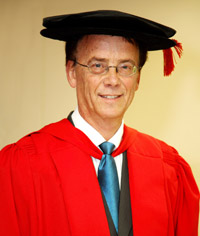 Itching to get the word out: Prof Paul Potter outlined the vast array of work done on allergies in South Africa.

Allergies are a serious business. So much so that the Health Professions Council of South Africa has just recently greenlit a formal sub-speciality in allergology at UCT, reported Professor Paul Potter in his inaugural lecture, Allergies in South Africa, delivered on 25 June.

Good thing, too. Millions of South Africans - some 30% of the population, in fact - suffer from some form of allergy, be it an early-morning's bout of hay fever or life-threatening anaphylactic shock from a bee sting.

"Allergies are very important in terms of morbidity and quality of life," said Potter, based in UCT's Lung Institute.

And as a contributor to everything from poor sleep to absenteeism, it's also a drain on the economy.

But South and Southern Africa are ideal vantage points from which to observe and study the causes of allergies, said Potter. The regions are home to an array of people, living conditions - from under-developed rural areas to sophisticated first-world-like suburbs - and biomes, so there's plenty of research material.

"Allergology in Africa is not only an important health priority, but Africa is a natural laboratory for studying the factors leading to the global epidemic of allergy," said Potter.

And that's illustrated in the sweep of research done by scientists at the Lung Institute and elsewhere in South Africa, some of which Potter listed. That work has identified an array of unknown allergenics, from grasses, fungi and seafood to ever-present house dust mites, locusts and latex gloves.

It's also come up with findings that fly in the face of conventional dogma. Like, as in a study in the nearby Ravensmead community, the hub of one of the highest rates of tuberculosis in the world, that breast feeding protects newborns only if the mother has no history of allergies.

So Potter and others are leading the local offensive against allergies. In addition to the new sub-speciality and the Diploma in Allergy offered by the College of Medicine of South Africa, the likes of Potter and UCT colleague Associate Professor Cas Motala are making their international marks in the field.

Potter recently put the finishing touches to a document for the World Allergy Organisation to standardise, across the globe, medical-student training in allergies. And he is keen to get the word out into the secondary and tertiary health-care sectors.

"There is a need for allergy-people out there."