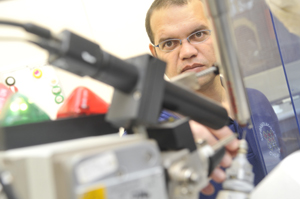 Often in the world of science when you're foraging around in the lab for one defining breakthrough, you end up, much to your surprise, with another.

That's pretty much what happened to Vincent Smith, who graduated with a PhD in chemistry last week, to the delight of supervisors Professors Mino Caira and Susan Bourne. (More on that later.)

In Smith's case, he was working on a way to create more soluble molecules for a group of herbicides. The poor solubility of some herbicides leads to problems - not least that they tend to change composition in sunlight, which could turn them toxic.

The way Smith was hoping to jack up the herbicides' solubility was via a doughnut-shaped sugar molecule known as cyclodextrin, a popular 'host' molecule in the pharmaceutical industry. Natural cavities in cyclodextrin make the molecule an ideal host in an inclusion compound (or inclusion complex, as it's also known), where one molecule (the guest) is slotted into another (the host) to make an entirely new compound.

Also, for Smith's purposes, cyclodextrin is known to be highly soluble, making it the 'carrier' of choice for many drug compounds, allowing as it does for easy absorption in the human body.

Smith did create the sought-after inclusion compounds for the herbicides, also establishing the importance of controlling the preparation conditions for such variables as solvent, concentration and temperature.

Then there was the surprise find. In chemistry, cyclodextrin is known to be a very stable compound-partner, not given to much variation. In fact, there are only three cases on record where scientists were able to mint more than one form (two at best) of a cyclodextrin-based compound for one particular guest molecule. Dr Elijane de Vries, a former student of Caira's, was the last to do so, in 2003.

Smith went three better. For one herbicide, metobromuron, he found he could prepare no fewer than five distinct complexes through minor changes in conditions. That has some dramatic implications for the pharmaceutical industry, not least for their cash-spinning patents.

â€œNow they have to start looking for multiple forms of cyclodextrin complexes," says Smith.

Smith already has three papers in the works. And to think that just a few years ago all this seemed a pipe dream.

Smith's first year as a UCT student was marked by anxiety-induced migraines and, just before final exams, the death of his dad, Gideon Smith, a security officer with the then Campus Control. Smith scraped through that exam (he wells up as he recounts that time in his life). The migraines followed him through that entire first degree, during which he had to work much of the time to complement the family's income.

After his studies, he landed a job as a research assistant in Caira's laboratories. And that could well have been that, except that Caira and Bourne lured Smith back into academia, even managing to get him registered for master's studies without having done an honours degree. (His work experience stood him in good stead.) Smith would pass that part-time master's - he had to keep working - with a distinction.

That, in turn, won him a scholarship from the Equity Development Programme for his full-time doctoral work. The rest is, well, recorded above.

His final result is as much Caira and Bourne's - and everybody else in the labs - as it is his, says Smith.

Just after graduation, Smith left for a two-month stint in Hungary and Romania, after which comes, hopefully, a postdoctoral post at Stellenbosch University.