Cluver among galaxy of stars at Caltech 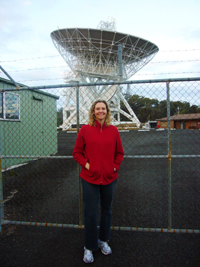 Gateway to science: Dr Michelle Cluver, who obtained her PhD through the Department of Astronomy, supervised by Prof ReneÃ© Kraan-Korteweg.

Somewhere in the Zone of Avoidance in the plane of the Milky Way lies what Dr Michelle Cluver calls the Coelacanth Galaxy. That's its unofficial name and, much like the prehistoric fish it's named after, it's a rare and unexpected phenomenon in the local universe.

With its enormous gas disk, the Coelacanth Galaxy is actively converting gas into stars.

"If this galaxy represents what we think it might, it would be equivalent to catching a coelacanth today, because these types of galaxies are extinct and we don't see them in the local universe," says the new UCT PhD, who graduated in absentia last week.

Now a postdoctoral researcher at the Infrared Processing and Analysis Centre at the prestigious California Institute of Technology (Caltech) where she continues to study the HIZOA J0836-43 galaxy (Coelacanth's scientific name), Cluver has an impressive platform for her work.

"In the local universe are regions of high and low mass density, forming spectacular cosmic webs of clusters, filaments, walls and voids. The Coelacanth is located on the edge of a particularly low density or 'void' structure and we think this has everything to do with its evolution and survival," she explains.

From this galaxy, scientists hope to learn more about how galaxies formed and grew in their early evolution.

Cluver is only the second PhD - and the first woman - to have emerged from the National Astrophysics & Space Programme (NASSP) stream.

NASSP is a newish consortium of institutions offering honours and master's programmes in astronomy. Among other goals, it aims to produce more PhDs, adding to the local and broader African astronomy community. The first PhD from the stream, Dr Bob Osano, lectures at UCT.

"All galaxies started off as concentrations of gas, and we hope to learn more about how they turned them into stars and built disks, making them look like the beautiful spiral galaxies we see today."

It was the Coelacanth Galaxy's massive gas disk that led to its discovery by a radio survey of the Zone of Avoidance (a band within the Milky Way's plane through which few extragalactic objects can be seen at visible wavelengths, because of interstellar dust), and, more impressively, nestled behind the famous Vela Supernova Remnant in the Milky Way.

"The fact that it has such a large gas reservoir is what makes it resemble galaxies that would have been ubiquitous in the earlier universe," says Cluver.

"Spiral galaxies generally have a bulge and a disk - making them look a little like fried eggs. This galaxy has a prominent bulge and appears to be building its disk, so it's 'growing' into a big spiral galaxy that will someday have many more stars than the Milky Way does."

If the galaxy had formed in a denser setting, it's likely that it would not have survived. It's also likely this galaxy cannibalised several smaller galaxies, and in doing so, accreted its gas disk over billions of years.

"Because this process has been undisturbed, it gives us an opportunity to see how early galaxies may have formed giant gas reserves and, subsequently, stars."

Is building the South African astronomical community a luxury for a continent burdened by disease and famine?

Cluver thinks not. "Although astronomy and science research may not provide immediate relief for socio-economic problems, not investing in science negatively impacts our country in the long run. And astronomy is a gateway to science for the public."