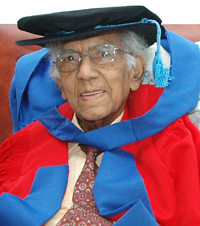 Richard Dudley, who was recently awarded an honorary doctorate in education from UCT, died on 31 May.

An alumnus of UCT, Dudley's 39-year teaching career at Livingstone High in Cape Town is widely recognised as the foundation upon which hundreds of former pupils built success in a wide range of professional and academic fields, here and internationally.

By providing an alternative to the curricula of the Coloured Affairs Department during the apartheid years, and his involvement with the Teacher's League of South Africa, Dudley galled both the authorities and his immediate supervisors

It was this philosophy that ensured that Dudley never became principal, even though he was eminently qualified for the job. He was banned in 1961, along with 200 other teachers, but was allowed to continue teaching.

Under his influence, Livingstone High became one of the foremost high schools in the country, and one of the most important feeder schools to UCT.

"Mr Dudley made a very significant contribution to the education of many pupils at Livingstone and his legacy will continue for many generations," said Vice-Chancellor Dr Max Price. "It was entirely appropriate for UCT to bestow an honorary doctorate on him during a private ceremony at his home a few months ago. We extend our condolences to the Dudley family."

The doctorate was awarded to Dudley on 7 April at his home as he was too ill to leave his bed.