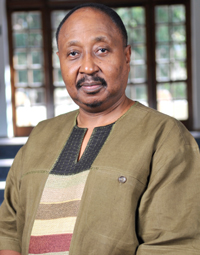 UCT will use Africa Day on 25 May as an occasion to showcase its significant research and academic collaborations with partners throughout Africa. Monday Paper spoke to Deputy Vice-Chancellor Professor Thandabantu Nhlapo about the university's renewed African thrust.

What is the rationale behind the Vice-Chancellor's vision to grow UCT's engagement with the rest of the African continent?

UCT, by virtue of its location and its relatively long history, is admirably placed to build on its sterling reputation as an African institution to become a sought-after destination and partner for Africa-generated knowledge and expertise. UCT academics already enjoy significant collaborations in sister universities across the continent, and the beauty of the Vice-Chancellor's vision is that it builds nicely on these foundations. It aims to establish UCT as an exciting place to live and work, attracting high-profile scholars from all corners of the globe.

How is this vision different from UCT's existing mission to be a world-class African university?

The Afropolitan vision is not really different; it simply recognises past efforts that have led to the enviable reputation that UCT enjoys as an African and international university committed to excellence, and builds on them. It signals UCT's connectedness to the continent and globally, and emphasises its unique expertise on issues facing the continent, combined, with an open, assertive engagement with the world from the standpoint of Africa.

How successful has the university been in building African partnerships?

UCT has established a wide network in Africa over the years. The academic exhibition and panel discussion that will take place today will show that there is already significant activity between UCT and many African partners. We are also hoping to encourage the university community to consider ways of deepening these relationships and to seek others, all with the aim to moving closer to our aspiration to become a recognised centre of knowledge on Africa. 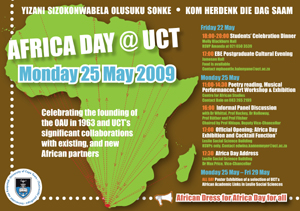 Can you give some examples of linkages that already exist between UCT and its African partners?

There is a very wide spread of types of partnerships and collaborations, varying in size, scope, geographical location and disciplinary focus. (The IAPO display at the exhibition will be an eye-opener for many people on this). Examples that come to mind include: the Percy Fitzpatrick African Institute of Ornithology; the Marine Research Institute; the Disaster Mitigation for Sustainable Livelihoods Programme; as well as the African Gender Institute, and the Centre for Contemporary Islam in South Africa. The Universities Science, Law, Humanities and Engineering Partnerships in Africa (USHEPiA), which features seven partners, continues to be a core initiative of capacity-building in Africa. These are only some - the tip of the iceberg as it were - of the myriad African partnerships enjoyed by UCT's academics.

How does this African thrust tie-in with the Internationalisation initiative?

Internationalisation has been on the go at UCT for over a decade, and the two concepts complement each other in many ways. Mainly, they both seek to insert UCT into networks outside South Africa's borders. By forging strategic alliances and partnerships, both in Africa and globally, both initiatives raise UCT's profile and connectedness, which are essential prerequisites for a future role as a centre of international and African scholarship. There are knock-on effects to this, including the fact that, in line with global trends in donor funding, UCT's positioning as a portal between the global north and global south will attract funding for research, student and staff exchanges, as well as regional and continental capacity-building initiatives.

How does this African vision align with the other UCT strategic themes such as transformation, research, and teaching and learning?

One of the clear benefits of this vision is its applicability to all the other aspects of UCT's forward strategy. It articulates well with transformation, not only in their shared interest in enhancing diversity and improving the institutional climate, but also in the transformative value of the vision itself. The vision will help to offer direction to the research energies of UCT academics at staff and graduate level, and this will inevitably lead to an Africa-rich curriculum across the board. As this vision unfolds, its impact will be felt in the classroom in many other ways, including the visibility of African visiting scholars and postdoctoral researchers, and eminent Africanists from all over the world.

How would you respond to the concern that these efforts by UCT may be seen as just another example of South African "expansionism"?

One has heard these concerns expressed and, to my mind, they are understandable. We must guard against any kind of behaviour that assumes a role for UCT as anything but an equal partner and collaborator, pursuing mutual interests. But I am pretty certain that we are up to the task. Experiences in partnerships such as USHEPiA have convinced many of us of the mutual benefits of such ventures: they are invariably two-way streets, where everybody learns as much as they share. One just needs to be cautious and respectful. For a start, one needs to think carefully before using words like "footprint' in describing UCT's presence abroad.