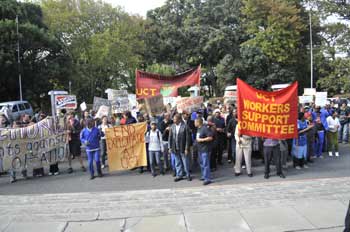 Exploited: Staff and students joined forces to march on Bremner Building to protest the working conditions of outsourced workers at UCT

Staff and students marched on Bremner Building on 30 April to hand over a petition and grievance letters against the "exploitation" of outsourced workers at UCT.

Protesters called for the vice-chancellor, Dr Max Price, but eventually handed over the petition, with over 3 800 signatures, to John Critien, executive director of Properties & Services.

Their demands included a minimum wage of R4 500, and benefits such as medical aid and subsidised tuition for these workers' children.

"UCT claims to 'strive towards ending the legacy of apartheid' and 'to promote equal opportunity and the full development of human potential'," protest organisers the, UCT Student Workers' Alliance, said in a statement. "This is clearly not being adhered to when workers struggle to make ends meet and are intimidated by company management."

In a recent letter to UCT staff and students, Price said that all employees of UCT service providers were paid at the Supplemented Living Level (SSL), which is "considerably higher than the minimum living levels."