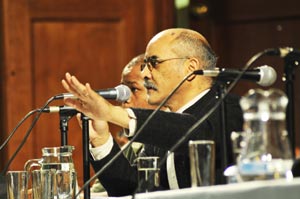 A panel discussion on 28 April titled The Great Debate kicked off the programme to address the issues surrounding the UCT admissions policy.

Hosted by the Admissions Review Task Team (ARTT), the discussion focused on the university's policy of using race as an indicator of past disadvantage, and asking prospective students to indicate their race on admissions forms.

Most panellists agreed that race could be used as a proxy for disadvantage to a certain extent.

DASO representative Ryno Geldenhuys noted that the issue should not be "over-politicised", and although it supports the policy set up by Senate, DASO believes that a policy based only on race as a proxy may exclude a small number of disadvantaged prospective students.

Erasmus argued that it was unacceptable to expect anyone to classify themselves by apartheid's categories. "Race and class are blunt categories that mask the nuances and complications of everyday life."

Erasmus suggested a race classification disclaimer be included in the university's admission form, with an optional question asking how prospective students or their parents were classified under apartheid.

Alexander noted that this was just the beginning of a lengthy process, and stressed the need to develop a time frame.

"Transformation is not just about the colour of the skin of students - it's about changing the whole institution," he said.

In 2006, the admissions review concluded that race was the best proxy for disadvantage, but that the use of race as a proxy will become increasingly inappropriate.

Notices on further events in the university-wide consultative programme will be issued as the schedule is finalised.