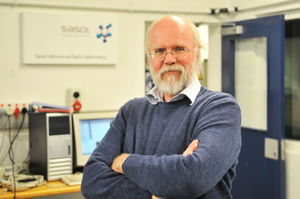 Under the watch of Prof Andy Yates, researchers are breaking new ground at the Sasol Advanced Fuels Laboratory.

The Sasol Advanced Fuels Laboratory (SAFL) is not a place where one would expect to find breathtaking beauty, but the researchers and students who work there are discovering "the prettiest stuff you can imagine", hidden deep in the heart of the average diesel engine.

In a rather nondescript building on the UCT campus, researchers are using and developing the most advanced technologies to find out exactly what makes Sasol fuel so special.

"We know Sasol fuels are different, but we want to know exactly why," explains Professor Andy Yates, head of the SAFL. "We are also developing the fuels of the future. Clean-burning, synthetic fuels are the obvious next step as crude runs out."

In 2002, Sasol approached UCT to move its future-focused research group onto the UCT campus. The company bears the entire cost of the lab. The marriage has been a success, with UCT's engineering department enriched by the lecturers and researchers in the lab, while lab staff benefit from being able to publish their findings in mainstream academic journals.

"There are standard international test procedures laid down," Yates explains, "but we need to go further than that. We are designing and running unique fuel performance tests in our laboratory."

In one of the laboratories, a large diesel engine has been set up to test emissions, fuel consumption, power, temperature and pressure. Road load conditions are simulated, but in the lab the engine converts all its power into heating water in a dynamometer, while up to 17 computers running simultaneously record and analyse the data produced.

An afternoon's testing can lead to three weeks' analysis in order for the researchers to interpret and understand what they have seen.

In another lab, a sapphire window with a diameter of 10cm plays a vital part in the combustion bomb, a piece of apparatus designed to measure soot, temperature and composition of fuels in the instant when the fuel combusts.

"Sapphire has special optical properties," Yates says, adding that the window itself has been the subject of intense contemplation by students with more than just their studies on their minds.

The work of SAFL is not only of interest to Sasol in its national and international operations.

"We can't do this kind of work in isolation," Yates explains. "We work in partnership with engine manufacturers such as Daimler for the truck and car engines, as well as Rolls Royce, General Electric, Pratt and Whitney and Honeywell for the jet engines we are using to test the Sasol jet fuel.

"The jet engine manufacturers are under huge pressure to clean up their emissions, and they are really excited about the potential offered by Sasol's synthetic jet fuel. It will allow them to maintain their safety and reliability and there'll be no need for a change in engine design." 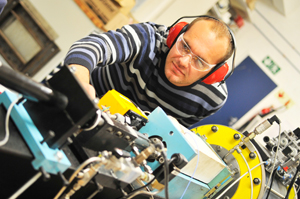 According to Yates, the real heroes at SAFL are the students whose cutting-edge research is helping to establish the lab as a world leader in its field.

One such student is Gavin Evezard, who single-handedly built the world's fastest rapid compression machine. He first explored the concept in his final undergraduate year, built a prototype for his MSc, and completed the real thing for his PhD.

The machine investigates what happens when an air/fuel mixture is squeezed very suddenly.

"It reveals a lot about the fuel," Yates explains. "What happens is that it 'thinks' about burning for a moment, starts to burn, stops burning and then explodes. These timescales are crucial to extracting the optimal combustion performance out of fuels."

The machine Evezard built stops a piston which is moving at up to 40km/hr in one half of a thousandth of a second. That's twenty times faster than a blink of an eye. The best rapid compression machines elsewhere in the world are slow in comparison, stopping the piston at over two thousandths of a second.

The machine was also responsible for another moment of supreme beauty. In the fraction of a second before the fuel begins to burn in earnest, it emits what Yates describes as a "mysterious blue" cool flame. And, proving that even fuel can be romantic, the colour is so incredibly beautiful that it inspired him to reproduce it in an opal pendant that he designed for his wife. 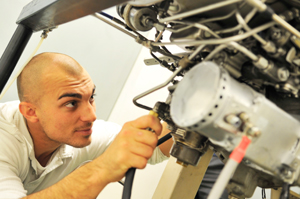 Another of the SAFL heroes is MSc student Nigel Bester, who set up a helicopter engine and proved that synthetic jet fuel provides an intrinsic efficiency advantage over conventional jet fuel.

"We are working on projects that have a big impact on the market," Yates says. "The implications of our research are huge, so it must be credible and correct. It is excellent work like this that helps to establish the Sasol Labs as a world leader in fuels research."