Talking his way to the top 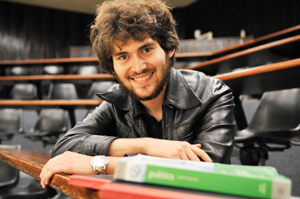 UCT social sciences first-year student Daniel Kaliski is the first South African to win the top spot in the individual speaker category at the 2009 World Schools Debating Championships, Kaliski competed in the international competition, which was held in Athens, Greece, in February, as part of the four-strong South African team, who made it to the octofinals (16 teams competing) to finally take ninth place.

The winning team was New Zealand, who defeated England 6-1 in the finals.

"It always helps when the topic is something that interests one personally," says Kaliski. "In one of the debates we had to argue in favour of vegetarianism, and since I'm a vegetarian, I was quite helpful."

But debaters often have to argue points of view contrary to their own, and topics are often controversial social, political and moral issues, such as terrorism, immigration and nuclear energy.

"Part of the challenge in debating is questioning your own assumptions and opinions about the world," says Kaliski.

Debaters speak four times in each round, and are awarded a score from 60 to 80. Kaliski took the best speaker trophy with a top score of 75.13.

He plans to use his debating skills as an active member of the UCT Debating Society, and will no doubt be more than helpful in the forthcoming Judge Edwin Cameron Invitational Tournament, which will be hosted by the University of Stellenbosch Debating Society in May.