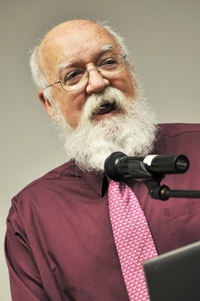 The Academic Freedom Public Lecture drew throngs to the Robert Leslie Building on Tuesday on a dual bill of entertainment and religion.

Speaker Daniel Dennett is not only an eminent philosopher, but an engaging speaker, especially on the subject of his title: What should you be free to teach your children about religion?

Dennett is co-director of the Centre for Cognitive Studies and Austin B Fletcher Professor of Philosophy at Tufts University. He is also author of Breaking the Spell, Freedom Evolves and Darwin's Dangerous Idea.

"The pace of cultural evolution is speeding up.

Religion should be steered in "benign directions", until society is ready to dispense with its "morality prosthesis", he said.

But what if religion is the "magic feather" that helps people "be all they can be"?

"We're standing at the brink of a profoundly secular age. We need to prepare institutions ...We will need to provide the moral prosthesis that will support that community that so many people need."

Religion is just not good for society, he says. Benign religion provides protection to toxic movements. It's also a vehicle for systematic hypocrisy.

"Could atheists be elected to high office?"

His policy proposal for religious education is simple: Offer compulsory religious education at all public and private schools as well as home schools. Children would learn about the world's religions such as Islam, Hindusim, and Roman Catholicism, and their histories, key figures, and philosophies.

"As long as you teach them this, you may teach your children whatever you want.

He suggests keeping the curriculum "non-threatening" for young children, just the basic facts about the various faiths. But when they're older, introduce the "great good and evil" of religion. Dennett believes this will go a long way to inoculating society.

"And elders who know that their children have been taught these facts will have to adjust their religious teaching."

How will this curriculum be created?

Dennett proposes a national congress of religious groups, who would decide what every child [in America] should know about their religion.