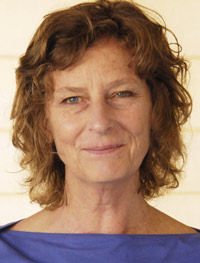 UCT graduate Alide Dasnois has made history by becoming the first woman to be appointed as the editor of the 133-year-old Cape Times newspaper.

Described as "an outstanding journalist" by Chris Whitfield, editor-in-chief of Independent Newspapers Cape, Dasnois replaces Tyrone August at the helm of one of Cape Town's biggest daily newspapers.

Dasnois, 59, completed her bachelor's degree in economics at UCT in 1970, and honours in the same field a year later.

She worked in the university's School of Economics and in the labour movement, before leaving South Africa in 1982 to complete a master's in development economics at the Sorbonne Université in Paris, France.

Dasnois returned to South Africa in 1992 and worked for The Argus' Personal Finance section before becoming the editor of the Business Report.

Since December 2006, she has been deputy editor of the Cape Times. The Independent Online website quoted her as saying of her appointment: "The challenge for us at the Cape Times is to ensure, despite all difficulties, that our paper continues to play its role in building democracy in South Africa, that many voices are heard, not just those of the powerful."